Working across several locations is imperative to a company’s success. But how does that work? Who plans, organizes, carries out, and monitors the overall project? How can modern software help?

This was the focus of a study project sponsored by PLM specialists PITERION and carried out by two groups of students from the Technische Universität (TU) Berlin and the University of Twente in Enschede, the Netherlands. The aim for each team was to work together to develop and build a functional prototype of an autonomous car.

Between April and July 2017, the students’ task was to construct a model of an autonomous car using Siemens NX and then use this model to build a prototype using Lego bricks, custom-made components produced by 3D printers, and some electronic parts. The entire workflow, i.e. all organizational tasks (for example, defining product specifications and structures, organizing the individual construction phases, choosing and processing materials, taking care of change and improvement management, testing the prototype, and creating documentation that could be understood by everyone), was to be carried out using Teamcenter©.

“The goal of the project, which was run with the support of Professor Rainer Stark from Berlin and Professor Eric Lutters from the University of Twente in Enschede, was to determine the differences in how students from each of the two decentralized groups would use both tools to collaborate and complete the task,” explained PITERION.

During the first stage of the project, which was launched with kick-off events in both locations, a series of lectures was held to give the students all the information they required to make the project as successful as possible. Topics included the reasons behind virtual collaboration and the issues that can arise, project management in virtual teams, strategic product development of mechatronic systems, as well as methodologies for collaborative product development in CAD systems.

In addition, there were introductions on how to use the NX CAD system, the Teamcenter© PDM system, and the Arduino development environment for the car’s electric power system.

The only key topics specified were electronics and mechanics, with responsibility for the former falling to the Dutch university and the latter to the TU in Berlin. While the students were given guidance by lecturers from each university, they were required to work out specific strategies and working methods by themselves.

The specific learning objectives were:

It soon became clear that having large teams where all members worked on each task was not an effective approach. In the end, small groups were formed for each key topic, with sub-teams within those groups taking on individual work packages – for example to create various mechanical and electronic components for the car.

Each project stage was to be documented in Teamcenter©, providing the teams with transparent data on development progress as well as on each change made to individual components. This is indispensable for communication, organization, and, ultimately, the success of a decentralized collaborative project.

In the final phase, a number of different prototypes were constructed, demonstrating that the parts created by the different working groups fitted together and could be assembled to make a functioning car. The project ended with the teams racing their individual cars against each other. “We are delighted to have been able to support the students with their first practical experience on a decentralized collaborative project,” PITERION explained. Two of the participants in the project are currently writing their master’s thesis in collaboration with PITERION. 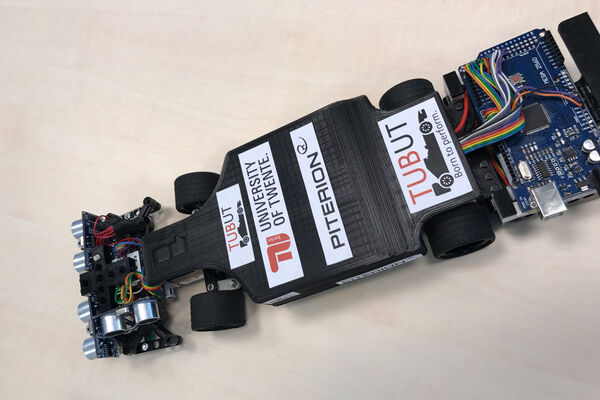